Webcasting, also known as live video streaming, is one of the fastest growing video production services. Companies are increasingly using webcasting as a means of communicating that is more engaging than a conference call. The reason that webcasting is so much more effective as a communication tool, as compared to a phone call, is that part of all messages is delivered in non-verbal communication that isn’t transmitted using audio alone.

Webcasting also has the benefit of connecting groups that aren’t in the same physical location at the same time to the same presenter and is often used at conferences, both for incoming and outgoing video communications. Live video streaming saves both the time and expense of flying a speaker to several locations and is an effective way for companies to lower their carbon footprint.

Single camera webcasts can be very simple to produce but multi-camera webcasts require professional equipment and a technical director to perform the live switching. For the most basic webcast, a single camera transmits both the audio and video feeds to a computer that is connected to the Internet and the video is uploaded to a streaming server. The video is then embedded on a webpage for viewers to watch.

The technical director operates a video switcher, which allows her to view each of the video inputs, and switch the output video back and forth between the different input signals. The video switcher is then connected to a specialized computer that encodes the video (and audio that is generally mastered on a sound board, independent of the video) and streams it to a streaming server. A streaming server is a server that is fast enough to deliver live video feeds – a standard server that is used for website hosting is not fast enough.

Many video production companies use streaming service providers instead of running their own servers. There are even some companies like Ustream and Livestream that offer free video streaming, but they interrupt the video stream with commercials so paid services are a better fit in the corporate market.

Top 5 tips for Producing Webcast Videos on the Internet

1) Don’t forget about the audio: Proper microphone placement is important and on-camera microphones are only useful for webcam-style presentations.

2) Avoid free streaming services: They interrupt the video stream regularly with commercials so your viewers will miss portions of your webcast.

3) Multiple camera angles are more engaging for your audience: Shot variety is one of the keys to retaining viewers and having multiple cameras means you can anticipate the next shot and not subject your viewer to pans back and forth searching for the next speaker.

5) Plan your pre-roll: You should start your webcast well before the scheduled start time and provide a holding slide with audio so the viewer knows they are getting both an audio and video signal in advance of the start time.

Shawn Lam is an award winning and professionally accredited Vancouver video producer, educator, and product reviewer who specializes in corporate video production, live video switching, and webcasting. He is a contributing editor for EventDV Magazine and served five terms as President of the BC Professional Videographers Association. You can contact his Vancouver Video Production company at
http://www.shawnlam.ca/

In recent years, digital marketing, compared to traditional promotion channels, has been taking a more and more...

Digital marketing is one of the most important aspects of running a successful business in today’s world. The... 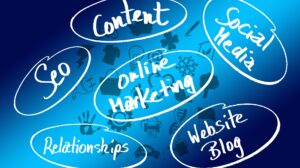 In niche and competitive industries, dominating your marketing strategy is an essential element for keeping a strong...