Computers play a big part in most people’s lives. That’s why it’s not surprising how many people have PC jobs today. And, with how fast technology is growing, PC jobs are not only here to stay, they are in high demand. They pay pretty well, too. So, how do computer jobs compare to non-computer careers? Take a look.

For comparison purposes, all salary information represented in this article is based on information from Payscale.com.

Computers wouldn’t run without software, which is why the engineers and programmers behind the software get paid so much money. The average salary of a computer programmer is between $85,000 and $100,000 per year, and some receive royalties. Of course, there are several career tiers you’ll have to work up to reach top pay in this job.

One major concern businesses have to worry about is their network security. Large servers that house confidential information are at risk of hacking, and network security administrators monitor servers and take preventive measures to protect businesses. Continuity analysts also play an important part in business security. They create plans to backup information in case of a natural disaster, server failure, or any other event that threatens a business. The top salary of a person working in network security is $100,000 per year.

Whenever businesses are designing new computer software or hardware, they need to have quality assurance analysts to test it. This is important because businesses don’t want to release anything to their customers that have problems or bugs. Quality assurance analysts need to know how to look for problems and be able to test every possible aspect of a software program. They can make as much as $80,000 per year, although there is a pretty big salary range for this job, with entry level pay at $35,000 per year.

Blog owners make money off of advertisements and affiliate links. Yes, most people don’t make a worthwhile amount of money blogging, but some net $500,000 per year or more. This definitely puts them in the list of top paying PC jobs today. Companies that hire bloggers pay up to $60,000 per year. There are several flexible, part-time blogging positions available, too.

As you can see, computer jobs are pretty lucrative, and have higher starting salaries than most jobs that require a college degree. Yes, more advanced degrees do tend to pay more in information technology careers, but overall, the starting salary for PC jobs is good. How does your PC job compare?

Shaun Chatman is a freelance writer by night and a gym trainer in the day. He lives in Dunedin, Fl. Shaun spends his free time playing with his kids or his gadgets. 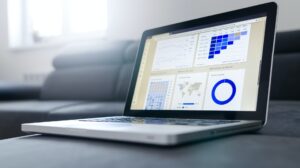