Who says adults are more responsible than teenagers?

According to stats released by AT&T, adults text and drive more often than teens do — 49 percent to 43 percent.

In fact, of the adults who do text while behind the wheel 43 percent admitted it has become a “habit.”

The problem is a fairly recent phenomenon — six in 10 commuters say they never texted while driving three years ago.

“While efforts to raise awareness of the dangers of texting while driving are working — 98 percent of commuters surveyed said they know sending a text or e-mail while driving isn’t safe — there’s clearly more work to be done to change behaviors,” AT&T said in a press release.

The carrier is calling on employers to do their part to bring an end to the dangerous habit by taking part in the National Distracted Driving Awareness campaign. AT&T is asking businesses to join the more than 165 organizations already involved in the Texting & Driving-It Can Wait movement. It involves enacting policies and using free technologies and communications materials available at att.com/itcanwait to convince employees to make a commitment not to text and drive.

“Businesses can help keep their employees and others on the road safe by encouraging responsible behavior behind the wheel, including obeying all laws related to the use of electronic devices,” U.S. Chamber of Commerce President and CEO Thomas J. Donohue said in a statement. “We also encourage all businesses to consider joining the ‘It Can Wait’ movement to end texting while driving. Together we can help turn the tide on this serious issue.”

AT&T’s survey is not alone in revealing the dangerous habits of drivers. A recent study by the Centers for Disease Control and Prevention found nearly 70 percent of American adult drivers chat on their mobile phones at least part of the time while behind the wheel.

Thirty-one percent of drivers drive and text, the study found.

Despite many states cracking down on distracted driving, only 10 states and the capital have enacted full bans on driving and using a Smartphone or tablet. 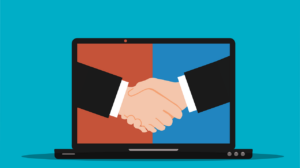 The enterprise sales cycle is typically measured in months, if not years. Products and services are often complex, and...