Google is continuing to whet consumers’ appetites for its much-talked about Glass, a wearable computer that responds to voice commands.

“The idea is: by bringing technology closer, we can get it more out of the way,” Jordan said in the video, which explains what Glass can do: take pictures, record video, chat, surf the Internet, check messages and so on.

Glass is far from being done, however, Jordan said, adding some aspects of the product could change before it hits the market.

But one thing will not change: Glass will focus on making technology convenient.

“Project Glass is about our relationship to technology. It’s about technology that’s there when you want it but out of the way when you don’t,” he said.

“It feels like technology is getting in the way more than it needs to. And, that’s what we are addressing with project glass. It’s so that you can still have access to the technology that you love but it doesn’t take you out of the moment.”

By wearing Glass as one would wear a pair of sunglasses, technology naturally blends into the user’s day, he said. Rather than having to fish a Smartphone out of one’s pocket, briefcase or purse, Glass is immediately ready to perform the user’s commands.

Jordan also discussed the project’s Mirror API and explained the ins and outs of how the device works.

Glass is expected to be released to the general public before year’s end for less than the $1,500 early adopters are paying. 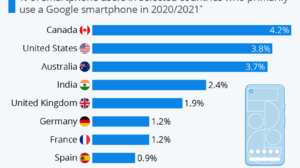 Google Has Yet to Crack the Smartphone Market

You will find more infographics at Statista This chart shows the share of smartphone users primarily using a Google...