Ninety percent of Internet users say being online has benefited them personally, a new Pew Research Center poll has revealed.

Only six percent see the Internet as a bad thing while three percent say it has had both positive and negative impacts on their lives.

The increasingly positive perception of the Internet is reflected into the growing usage of it.

Usage has surged significantly since the introduction of the Internet in 1995. And, with the Internet about to celebrate its 25th birthday next month, a full 87 percent of U.S. adults are now active online.

The proliferation of Smartphone and tablets has made Internet access more convenient as well, Pew found. In fact, 68 percent of adults connect to the Internet with mobile devices.

Since Pew started its survey in 2000, cellphone ownership has grown from 53 percent to 90 percent and Smartphone use has risen from 35 percent in 2011 to 58 percent currently.

The Internet has become so much a part of everyday life that more than half (53 percent) of all American adults admitted it would be “very hard” to give up, compared with 38 percent in 2006.

Cellphone owners are nearly as passionate about their device with 49 percent saying it would be equally hard to give up their handset up from 43 percent in 2006. Thirty-five percent would have trouble giving up television, dipping from 44 percent eight years ago while only 28 percent of those polled would be hard-pressed to do without a landline — a 20 percent drop from 2006. 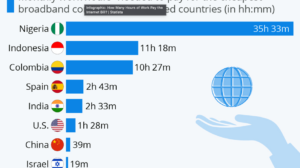 How Many Hours of Work Pay the Internet Bill?

This chart shows the monthly work hours needed to pay for the cheapest broadband connection in selected countries...