Social media marketing is a broad term that covers many options. There are a wide variety of social media outlets, some more mainstream than others. Choosing the right options for your company can be a careful balance, but if it isn’t researched thoroughly or taken seriously, the time you spend posting might be all for naught.

Facebook has long been seen as the holy grail of social media marketing, but it has undergone quite the change in the last few years. Started as a connection point for college students, Facebook is now seeing a huge loss in numbers for those within the younger demographics. Many attribute this to the fact that users’ mothers and grandmothers are now on the social media forum, making it not as much fun to post pictures of things that they might or might not have done over the weekend.

iStrategy Labs recently reviewed Facebook via its social advertising platform and concluded that the social media site had lost three million users aged 13 to 17 in a three-year period. The study also showed an additional three million users lost in the 18 to 24 age group. An increase in use by older Americans has kept Facebook’s overall membership at an increase of 23 percent over three years, but social media marketing to the lucrative younger set within Facebook might not be sure-fire anymore.

The majority of those who left Facebook, however, are still involved in some sort of social media. There are newer ways to use social media marketing to reach your target audience, but marketers are having to stay on their toes to keep users interested and create content that users find meaningful enough to engage with.

Reddit and Snapchat are relatively new social media sites and social media marketers are just now realizing how to engage within these new mediums.

Reddit is a tight-knit group that is determined to keep their content organic. Much like a digital bulletin board, Reddit users drive content and respond to posts as they see fit. There are a variety of subReddits that have strong followings and deep engagement within the community.

Social media marketing is difficult within Reddit because the users hold the highest regard to regular interaction. Reddit posts are highlighted based on a voting system, so it is easy for posts to get downgraded to virtual deletion if they are voted down by Reddit users.

For social media marketing purposes, Reddit’s demographics could not be more ideal. The majority of users are male aged 18 to 34. They are also college educated with lower to median income levels. This demographic holds great purchasing power that is not seen in any other social medium. Since a Reddit post’s visibility depends on a democratic voting system, viral potential is high. It also offers the ability for a social media marketing campaign to be delivered to a highly targeted audience via subReddits.

Reddit is hard to break into, but it has been done. The key for social media marketers is regular engagement and amazing, informative content — but with the huge rewards to your target audience, the risk might far outweigh the rewards.

At the risk of sounding cliché, Snapchat is where all the young kids are hanging out these days. The draw for the younger set? Snapchat allows users to send photos and messages that automatically delete themselves shortly after being viewed, negating the prying eyes of parents. More than 20 million snaps are being shared every day, and businesses targeting younger, Smartphone savvy users have started to take note.

One of the first social media marketing campaigns to be released on Snapchat involved the use of a coupon.

Customers were to take a picture of themselves enjoying a product then send the picture to the company via Snapchat.

The customer was then sent a message back with a coupon, but there was a catch. Due to Snapchat deleting content once viewed, the coupon could only be opened at the point of purchase. The coupon was good for 10-90 percent off your order, but customers were not sure of their actual “free gift” until it was purchasing time.

It made for a wonderful campaign that was shared virally — and marked the start of the Snapchat generation’s foray into social media marketing.

As you can see, social media marketing is not just a Facebook show anymore. Reddit and Snapchat are new and worth discussion, but there is also a lot for marketers to gain on social media platforms that already have some strong legs; Pinterest, Instagram and Twitter for example. The most important thing to consider is your audience — then follow them where they are and start engaging. 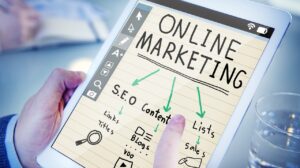 Benefits of Online Marketing in Business

Why you need online marketing for every small business out there in the country? It gives you a brand identity and...

Instagram is becoming more and more popular by the second! Many people are utilizing this platform...