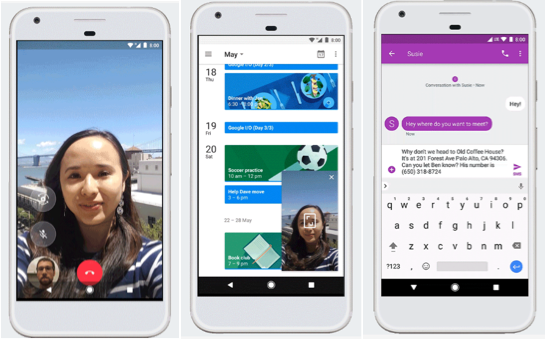 When Android O comes out of beta later this year, it will bring new features to Android-run Smartphones and tablets.

“With picture-in-picture, you can seamlessly do two tasks simultaneously, like checking your calendar while planning a party on a Duo video call,” Google vice-president of engineering Dave Burke said in a blog post.

“And Smart Text Selection improves copy and paste—because who enjoys fumbling with text selection handles? By using machine learning to recognize entities on the screen—like a complete address—you can easily select text you want with a double tap, and even bring up an app like Maps to help navigate you there.”

Improved battery life and enhanced security will also be a big part of Android O.

Devices with the new operating system will have a quicker startup and faster apps courtesy of optimizations that keep the battery from draining.

When it comes to security, Google has developed a new service, dubbed Google Play Protect, that scans apps for suspicious activity. Play Protect will be built into every device that has Google Play. The tool constantly updates and automatically takes action to safeguard the phone and its data.

“All Google Play apps go through a rigorous security analysis even before they’re published on the Play Store—and Play Protect warns you about bad apps that are downloaded from other sources too,” Android security manager Edward Cunningham said in a blog post. “Play Protect watches out for any app that might step out of line on your device, keeping you and every other Android user safe.”

The security feature includes a Find My Device service as well, enabling users to locate, ring, lock and erase their devices—phones, tablets or Smartwatches.

The finished version of O, which will replace Android Nougat, will begin rolling out later this year.