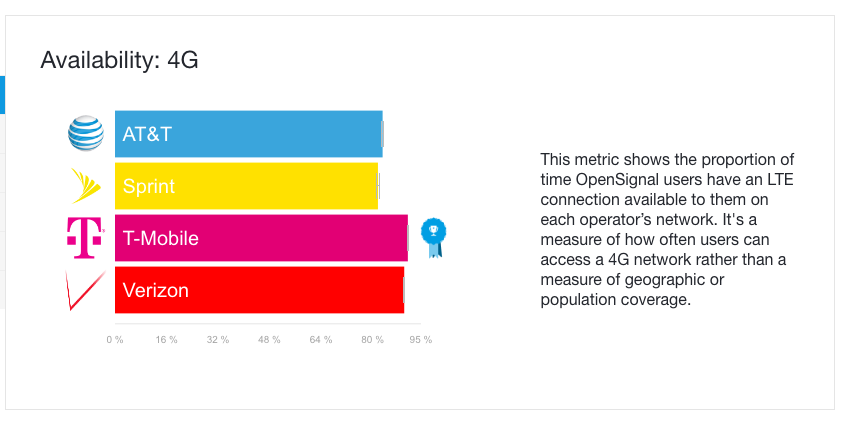 The unlimited data plans introduced by Verizon and AT&T come at a price: slower speeds.

When the wireless providers brought back their respective unlimited plans back in February,  their mobile data services were effected immediately.

“Welcome to the new age of unlimited data in the U.S.,” OpenSignal said in a blog post. “Our measurements show that Verizon and AT&T’s 4G speeds and overall speeds have fallen as a result of that new deluge of data demand on their networks. Taking advantage of Verizon’s setback, T-Mobile moved ahead of its arch-rival in every metric we track. Analyzing more than 5 billion measurements, OpenSignal compared the 3G and 4G performance of the Big 4 mobile operators in the U.S.”

In the six months since bringing back their unlimited plans, Verizon and AT&T both had a major decline in OpenSignal’s 4G speed tests. Verizon was the hardest hit — its average LTE download test fell 2 Mbps to 14.9 Mbps.

The decline in Verizon’s and AT&T’s speed is good news for T-Mobile, which won all of OpenSignal’s speed tests across the board.

T-Mobile, predictably, took the opportunity to gloat over the results.

“Better matters. But BEST sure as hell matters more,” T-Mobile CEO John Legere said in a press release. “I’ve always said, ‘Shut up and listen to your customers.’ Well, now, customers across all US wireless providers have spoken—through billions of their network experiences—and they’ve told us loud and clear that America’s Un-carrier has built America’s BEST unlimited network.”