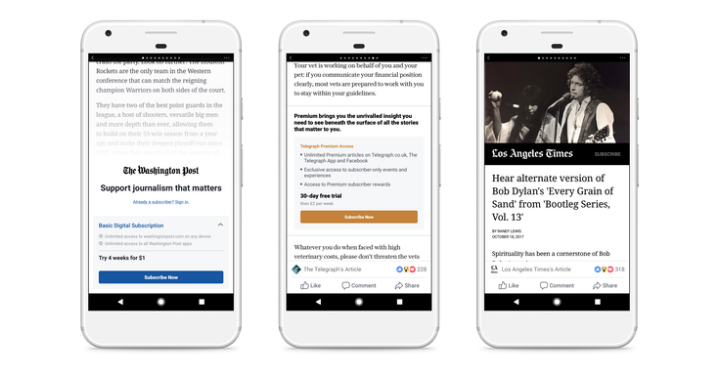 Facebook will soon be testing news subscription models in Instant Articles with a small group of U.S. and European publishers as part of the social media giant’s Journalism Project.

The test, at least initially, will only be compatible with Android devices.

Early partners include Bild, The Boston Globe, The Economist, Hearst (The Houston Chronicle and The San Francisco Chronicle), La Repubblica, Le Parisien, Spiegel, The Telegraph, tronc (The Baltimore Sun, The Los Angeles Times, and The San Diego Union-Tribune), and The Washington Post.

“Earlier this year, many publishers identified subscriptions as a top priority, so we worked with a diverse group of partners to design, refine, and develop a test suited for a variety of premium news models,” Facebook said in a blog post.

“We also heard from publishers that maintaining control over pricing, offers, subscriber relationships, and 100 percent of the revenue are critical to their businesses, and this test is designed to do that.”

Facebook is testing two options: a metered model that enables viewers to read 10 free stories from a publication each month before a subscription is needed and a freemium model in which the publishers controls which articles are locked.

When someone not yet a subscriber encounters a paywall within Instant Articles, they will be prompted to subscribe for full access to that particular publisher’s content. If that person chooses to subscribe, the transaction will take place on the publisher’s website with the publisher keeping all of the revenue.

The subscriptions will include full access to a publisher’s site and apps.

Paywalls as part of Instant Articles will begin appearing in the next few weeks.