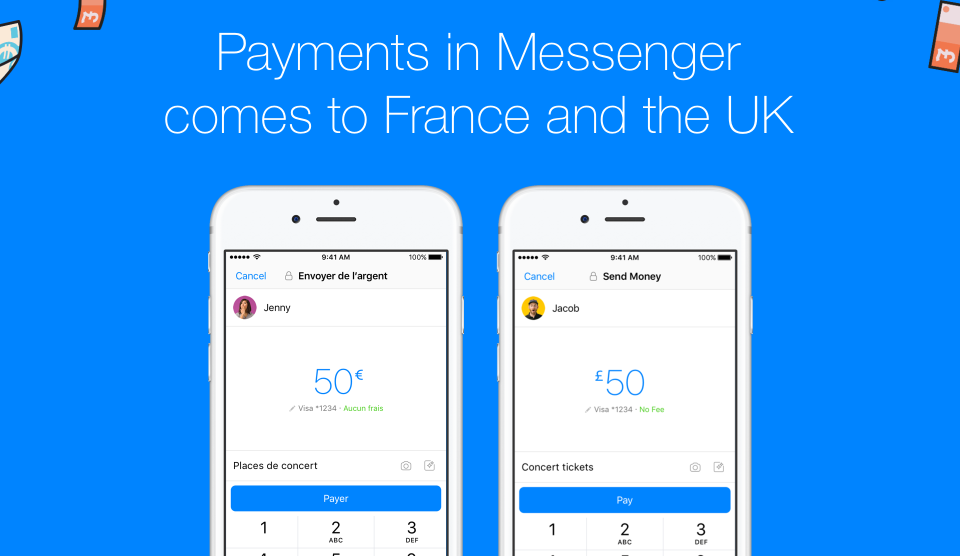 Facebook Messenger payments are rolling out to users in the U.K. and France more than two years after the functionality launched in the U.S.

The feature, which enables users to send money to friends for free, is rolling out to everyone in the two countries over the coming weeks. Payments can only be sent to someone in the same country — cross-border payments are not yet available.

“We asked people in France and the U.K. when they wished they could send money to someone in the moment,” Facebook said in a blog post. “The top reasons for sending money include celebrations, social events and festive occasions. It’s those everyday moments we’re trying to make a little easier. We’ve seen that in the US, most people use payments in Messenger to send less than $50 at a time, and sending money in Messenger has become a part of everyday life for many.”

Once the payment function is installed on the user’s phone, sending money is easy. After sending a message to a friend, the user simply taps the ‘$’ icon and enters the amount he or she wishes to send. The user then clicks ‘Pay’ in the top right and adds his or her debit card details to conclude the transaction.

To receive money, simply open the message, tap ‘Add Card’ to add payment information and then accept the money.

Messenger payments will be available to those on iOS, Android and desktop.