By Jennifer Cowan in Social Media 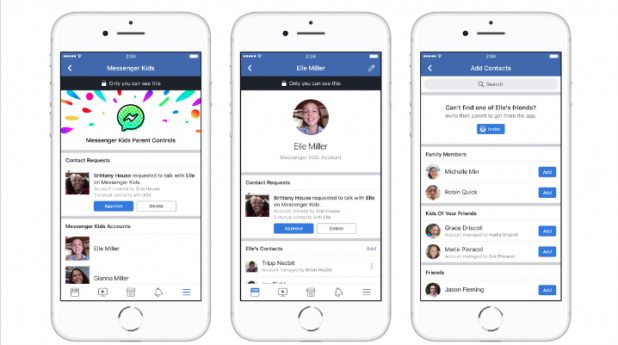 Facebook is rolling out a parent-controlled version of its Messenger app for young children.

Messenger Kids, which is available in preview mode in the U.S., is a standalone app for children’s tablets or Smartphones. The app is controlled from a parent’s Facebook account via the Messenger Kids Controls panel and gives parents the ability to set a list of approved contacts. Kids cannot talk to anyone who has not been approved by a parent. “After talking to thousands of parents, associations like National PTA, and parenting experts in the U.S., we found that there’s a need for a messaging app that lets kids connect with people they love but also has the level of control parents want,” Facebook product management director Loren Cheng said in a blog post.

“Whether it’s using video chat to talk to grandparents, staying in touch with cousins who live far away, or sending mom a decorated photo while she’s working late to say hi, Messenger Kids opens up a new world of online communication to families.” Once a mom, for instance, sets up an account for her seven-year-old son, he can then have one-on-one or group video chat with contacts his mother has approved. The home screen will show the boy who he is approved to talk to and when they are online. Masks, emojis and sound effects can be used to liven up a conversation.

Aside from video chat, kids can send photos, videos or text messages to their parent-approved friends or adult relatives, who will receive the messages via their regular Messenger app. Children can choose GIFs, frames, stickers, masks and drawing tools from a kid-friendly library to decorate their creations.

Messenger Kids is an ad-free environment and in-app purchases are not available. The app, which was designed to be compliant with the Children’s Online Privacy and Protection Act (COPPA), is available on the App Store for iPad, iPod touch, and iPhone and is coming soon to the Amazon App Store and Google Play Store in the coming months.

Facebook at Work Gets Major Client: Royal Bank of Scotland