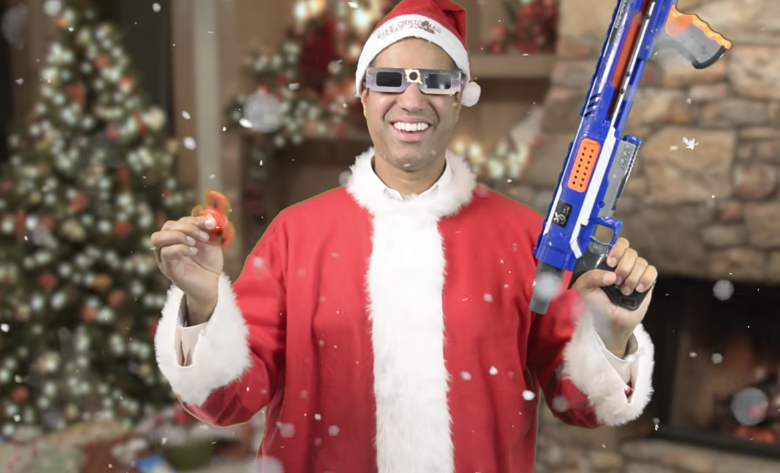 With the Federal Communications Commission set to abolish Net Neutrality today, chairman Ajit Pai is seeking to reassure Internet users that their online lives will continue on as before.

In a YouTube video that is obviously meant to inject some humor into a situation that has many up in arms, Pai dresses as Santa, does the Harlem Shake and takes food selfies in a bid to reassure Americans that their “Internet freedom” will not be impacted.

A lot of Americans are not buying it, however.

“So this is how the Internet dies, huh? Not with a bang, but with some spineless, out of touch, unfeeling, corporate weasel doing the Harlem Shake? I cannot put into words how insulted I am,” one Internet user posted in the video’s comment section.

“Way to humanize your corrupted corporate shell self,” another commenter wrote. “I also really appreciate you calling everyone disagreeing with you a troll. You’re an absolute joke that no one wants in power, everything you do only benefits yourself. you attempting to silence everyone who disagrees with you claiming that we never make good political arguments while releasing shit like this and lying through your teeth is absolutely infuriating.”

Pai, back in January, indicated  he would do everything he could to dismantle Net neutrality when he was named FCC chairman. He replaced Democrat Tom Wheeler, who championed Net neutrality with the backing of then-president Barak Obama.

Under Net neutrality — a set of rules implemented in 2015 that restrict the actions of Internet service providers — blocking, throttling and paid prioritization were not permitted. The rules effectively prevented Internet service companies from implementing “fast lanes” for streaming video providers willing to fork over enough cash to give their content a leg up from their competition.

Pai has described Net neutrality as the micromanagement of the Internet. His proposal, which is likely to be voted in today, is to “require Internet service providers to be transparent about their practices so that consumers can buy the service plan that’s best for them and entrepreneurs and other small businesses can have the technical information they need to innovate.”

Unless something unexpected happens, Net neutrality will be abolished in a 3-2 vote.