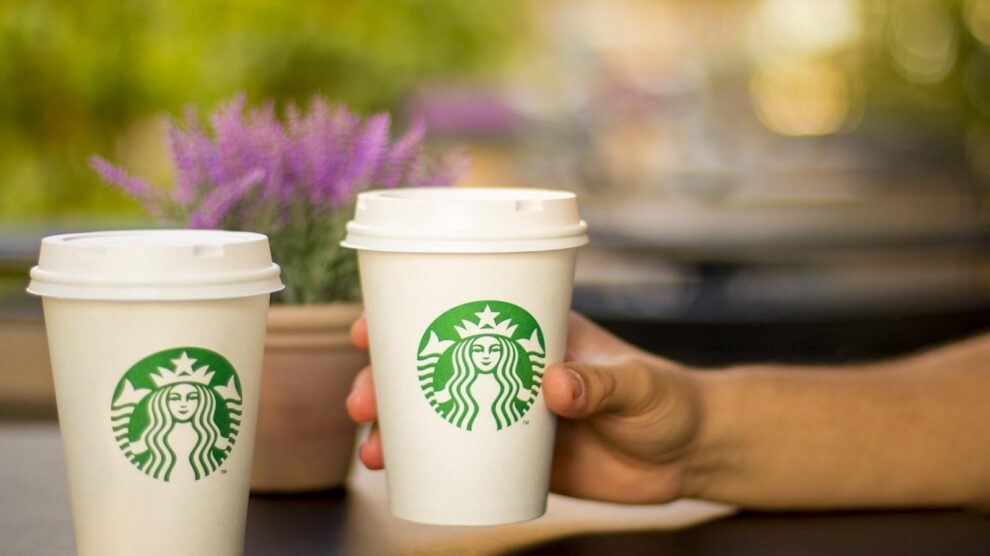 ‘B for C’ is going to be the new thing. Let me expand that.

Well, the fact is Starbucks’ customers won’t be able to pay for their Frappuccino in Bitcoin. At least not at the moment.  While speaking to Motherboard, Starbuck’s spokesperson confirmed that they are not accepting the top cryptocurrency for now.

But that’s not to say the company is not interested in Bitcoin at all. In fact, through a partnership with Microsoft and Intercontinental Exchange Inc (ICE), Starbucks has found a way to help Bitcoin holders be able to buy coffee at their shops through an exchange platform called Bakkt.

Here is what Kelly Loeffler (Bakkt CEO) had to say about the company in the official press release:

In this relationship, Starbucks will serve as the “flagship retailer” to ensure proper applications are developed to help customers convert their digital currencies into fiat money for use at their shops.

If the giant coffee maker is not interested in handling Bitcoin directly, then why do you think they care? Because they want to stay on top of the game as the leading proximity-based Mobile Pay vendors. As Starbucks moves an inch closer to making Bitcoin payments a reality in its shops, the one question that has been bugging crypto holders (or HODLers, as they like to put it) is, “where can I spend Bitcoin?” There are a few places in the world- especially the online where Bitcoin is accepted as a medium of payment.

PizzaforCoins.com and Helen’s Pizza in Jersey City, N.J are the places to visit if you are craving some pizza. The former delivers your package right to your door for those in the US. For real meals (not that pizza is not), The Pink Cow in Tokyo, Whole Foods, Carryupnow.com in Francisco Bay and many other restaurants can get you sorted with mouth-watering delicacies.

For coffee lovers, we’ve already pointed out that at Starbucks, you’ll have to swap your BTCs into US dollars via Bakkt before placing an order for a mug. However, if that seems like a heck lot of process, you can pay for coffee with Bitcoin directly at places like Coupa Café (Palo Alto), Bitcoincoffee.com, Cups, and Cakes Bakery (San Francisco CA), café Ducatus in Singapore and many more.

Paying for flights and hotels with Bitcoin is now possible and many outlets offer those services. Exceptional examples include CheapAir, Expedia, Surf Air, One Shot Hotels, WebJet, and Bitcoin. Travel. If you have loftier ambitions, the best place to visit is Virgin Galactic.

Microsoft accepts Bitcoin payments for those who use their app store to download stuff. Other software and Internet-based portals that accept the king of cryptocurrency include Reddit, Namecheap (Domain Name registrar), Wikipedia, The Internet Archive, Zynga (mobile gaming), Bloomberg.com, and WordPress. Among retail businesses, Overstock seems to be the top choice as it was the first to allow Bitcoin payments in 2014.

The evolution of Bitcoin transactions

Before 2015, Bitcoin basked in the glory of being the best digital currency especially for sending untraceable payments. In a world where the taxman lies in wait for huge commissions on cross-border payments, cryptocurrencies provided a tunnel system for saving a lot of bucks. With time, shrewd investors and the common folks realized the value of cryptocurrencies- and that was when everything changed.

Previously, it would cost a few cents on the dollar to send many Bitcoin to other holders. However, as the network started to register an influx of users, it became obvious that the core software wasn’t prepared for that.

Transaction fees started to go over the roof with the worst case scenarios being reported during the bull run of 2017. The fee went from an average of around $7 to $28. Some even said they were charged up to $55! Furthermore, during the peak loads when the network turns into a beehive, longer processing times are also witnessed. And during these times, miners focus more on transactions with a good reward (those with bigger transaction fees).

Since the biggest problem is speed, various updates and technologies have been introduced as the silver bullet.  While transaction fees are still a problem, the time it takes for a transaction to be confirmed has decreased since 2007.

While you were required to wait for days to get your satoshis a few years ago, now it takes somewhere between 10 minutes to a maximum of 8 days. The impressive speed is courtesy of the new updates such as SegWit and The Lightning technology.

Other cryptocurrencies with faster speeds and lower transaction fees While Bitcoin has been battling scaling and transaction fee issues, some cryptocurrencies such as Ethereum, Litecoin, Bitcoin Cash, and Digibyte have been enjoying a fairly smooth ride. On average, BTC blockchain processes roughly 7 transaction per second, which is slower when compared to Ethereum (15), and Ripple (1500/sec).

Visa, on the other hand, handles 24,000 transactions within a second. Well, if Bitcoin intends to outshine traditional banking as the fastest mode of payment, then there is a truckload of work to be done.

Here is the bottom line:

Buying coffee with Bitcoin from Starbucks at the moment is just another pipe dream. The same goes for buying a few groceries and other items in a supermarket. The higher transaction fees and long confirmations are making it a less reliable payment method.

But don’t give up hope already. With new tech implementations such as the lightning technology, SegWit, and a few that might come in the future, it could be possible to use Bitcoin for day to day transactions. The future of this currency is great-even though the changes are happening at a snail’s speed. 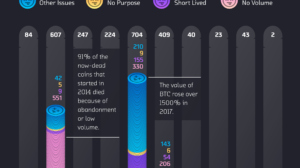 CoinKickoff reviewed the life of 2,400 now-dead coins and created a series of visualizations analyzing 10 years of dead... 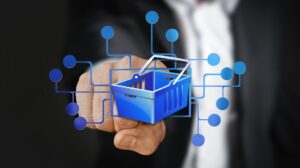 The decision to have design elements can make or break your customers’ shopping experience. Ideally, customers look for...

Ana Farr is the Community Manager at ecommerce-platforms.com and Unblock.net. She is a matcha and mindfulness enthusiast and loves to chat about the implications of Blockchain technology.