Beware the Google AdWords team. If you don’t know how to set up your Google AdWords campaign, you are likely in for an expensive journey through plenty of unnecessary clicks at exorbitant costs.

I learned this the hard way even though I had gained a lot of previous experience using AdWords with pretty impressive results. What I did not have experience with was setting up a display ad campaign. One of my clients, a plastic surgeon, was having a free seminar for which his staff advised him of where he should be advertising. Based on nothing beyond their personal preferences which emphasized using online strategies, he followed their advice by committing a fixed budget to advertise on Facebook ($300), running a display ad in a popular monthly local glossy print magazine ($1,200), and using the campaign I suggested on Google AdWords ($1,500).

I had proposed using AdWords as a way to attract interested candidates using advanced online algorithms. I explained to him how my other clients get many worthwhile clicks and lots of business. So he enthusiastically agreed to try it. After developing a very attractive display ad and submitting it to my ad rep at Google, I allowed him to set up the entire campaign thinking it would be outstanding. I was told that in 10 days they would measure its results and optimize the campaign to perform more efficiently. What they failed to realize was that we didn’t have the luxury of 10 days to waste my client’s money.

Immediately, once the campaign started, it used up the whole day’s budget in 20 minutes’ time for which we got lots of expensive clicks but no sign-ups. My rep’s first reaction was that our meagre budget was limiting the campaign’s effectiveness and we needed to increase the daily total. When I conveyed this idea to the client, he was completely convinced we should add to the budget. However, I was not so sure and told him why. After investigating, I realized that the keywords they had used to represent this campaign probably were attracting the wrong element: voyeurs who were expecting to see pornographic-style photos of women with breast lifts, implants and other similar topics.

After “pausing” the campaign (turning it off), I embarked on an educational journey through keyword control and management that still failed to deter another 20-minute wasted episode on a following day. However, I learned that I could control what websites my ads would be appearing on which was originally set to “auto,” and included a full range of sites meant for the masses but not necessarily the types of more discerning respondents we sought.

Taking Matters Into My Own Hands

Most importantly, I learned that if the campaign had been set up to include “search and display,” I could capture the interest of candidates using Google Search instead of just those perusing a selection of celebrity gossip and sensationalistic websites where they may see our ads during their decadent moments of self-indulgence. To accommodate use of the Search strategy, I added text ads to our campaign because display ads would not be appearing in search results.

I also limited the income level of the marketing regions we were targeting since plastic surgery requires a hefty personal net worth usually without the assistance of health insurance. Although it had occurred to me that we should eliminate men from this effort, there really is no way to be sure who is being reached because many users do not submit a user profile and a home’s Internet access could include an entire family, not just our prime target of women. Besides, men could also benefit from plastic surgery procedures and assuming men to be the culprits of the excessive unprofitable clicks was by no means a fair conclusion. (Could have been teenagers, for all we know!)

When I enabled the campaign (turned it on), I saw a much-improved rate of return and after a week of exposure which was our time-frame remaining prior to our deadline, we actually got (gasp!) one commitment. The client was looking for a minimum of 50. And as it turned out, the one commitment which was for three attendees, never showed up at the event. My client was not happy, nor was I.

Plenty of Excuses to Blame the Client

One of the issues the Google rep mentioned to me was that the client’s website was not mobile-friendly and 72 percent of viewers who had clicked had done so from their mobile devices. My client is a very stubborn man and has resisted developing a mobile site because he insists on micromanaging every component of his business, which includes the content of his website…not to mention being a serious advocate of not “wasting money.” In addition, in my 10 years of working with him, he has never once had a spare minute available to devote to such things. However, he indicated that both he and his wife were able to see his website on their rather hefty Smartphones which contradicted what the AdWords rep had said. So when I tweaked his AdWords targeting, I removed only the smallest mobile devices so those users would not waste our click budget. This was another reason he expressed distrust of the Google reps’ claims. As did I.

Still, he was very secretive about sharing what kinds of results he had gotten from his other modes of marketing. But I venture to guess that he got a similar return from his Facebook advertising as well as his print campaign. I say this from experience with other campaigns both for him and other clients I represent. When I asked how many people attended his event, he admitted that it had attracted 10 people, most of whom were already his patients.

In any case, I recommended that he not use Google AdWords again until he upgrades his website to accommodate all mobile devices.
What Have We Learned From This?

This experience certainly changed my perspective of the almighty Google which previously I had held in the highest regard. Sadly it had entered the ranks of unscrupulous businesses that dupe the customer under the guise of providing a valuable service. Could this be a case of one bad apple unfairly tainting my opinion of an entire company? Perhaps, but the fact that my ad rep’s team set up this campaign to eat up my client’s entire budget before the ten-day proving ground had elapsed makes me wonder. Also, my rep completely abandoned me once I paused our campaign because I thwarted their attempts to cash in on our naiveté. All I can say is beware those smiling faces. 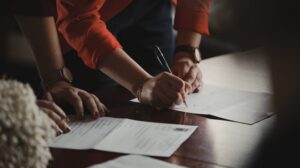