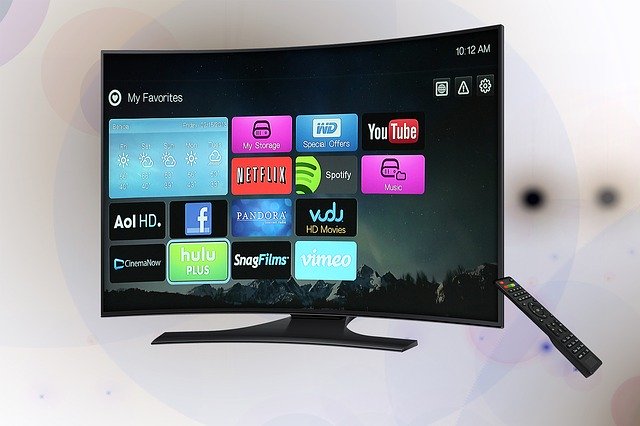 Marketing terms and TV terminology can easily confuse anyone. If you are a novice buyer, the sheer variety of options and the onslaught of information about television sets can overwhelm you. The salesperson going on and on about the specifications will not help either. Unless you get a grip on the situation and do your research properly before heading out.

Now, there are different kinds of TV sets in the market. Some are ‘internet-ready’, while a whole lot of them are ‘smart.’ Knowing the difference between these two types can help you make a wise decision. This is where the present post comes in handy. It will elaborate on both types of TVs, what they can do and what they can’t, so you can easily discern the options while buying a new set. Read on.

What is an Internet-Ready TV?

The internet is a quintessential part of our daily lives. We rely on the web to acquire information, build a business, seek opportunities for entertainment and interaction, and do so much more. Multiple devices allow internet access in today’s world, smartphones being one of them. Television sets have also followed suit, and there is hardly any TV company at present that doesn’t offer internet-ready models to consumers.

An internet-ready TV is a television set that is designed to connect you to the internet directly and deliver web content, such as weather information, YouTube videos, and Netflix series, right to your TV screen.

For an internet-ready TV, you do not need any outside equipment to gain web access, since it’s already built-in. What you do need is a high-speed broadband like Spectrum internet to power the TV’s web functionality. Usually, there is an Ethernet port or two at the back of the set, which you can link with your cable modem to experience high speeds. However, you might be hard-pressed to find a model that has built-in Wi-Fi too. In that case, you can get an external adapter to connect your internet-ready TV to your home router wirelessly.

Internet-ready TVs come with a number of interactive features that let you perform multiple functions on the web. You can, for instance, gain access to video and audio streaming apps (those that are free and those that are paid), such as Amazon Video on Demand, Hulu, and Pandora. Content availability depends on the manufacturer and model type. There is no need for an additional device like a video game system to stream Netflix either.

Moreover, you can open smartphone-like applications or widgets, Picasa or Flickr slideshows, video games, social networking apps like Facebook or Twitter, live sports, and weather updates on the display. What you can’t do is open a web browser and search for the next flight, as most of these TV sets don’t have built-in internet browsers. Here’s a quick feature comparison between the top internet-ready HDTV manufacturers: 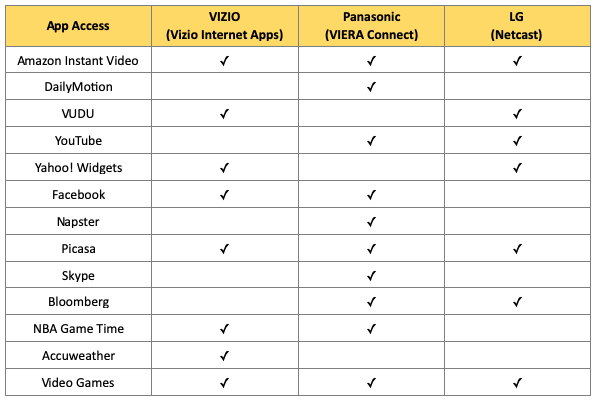 An internet-ready TV looks a lot like a standard television. What sets it apart is the Ethernet port, the capability of connecting peripherals such as Bluetooth remote control or USB keyboards, and the convenience of removing mediators like video game systems or set-top boxes from the equation.

What is a Smart TV?

You can say that a ‘smart’ TV is a successor of an internet-ready TV. Both have more or less the same core functionality: Giving you direct web access so you can stream media, play games, operate apps, and check up on social media on your TV screen. Nearly all the smart TVs come with an Ethernet port and built-in Wi-Fi. You can connect the television set to your home internet wirelessly if you just want to explore applications or you can hardwire it if you want to watch 4K Ultra HD content. Where a smart TV differs from an internet-ready TV is in the advanced features section.

Smart TVs have next-level specifications made possible by technological advancement, which makes them move one step ahead of internet-ready TVs. These are:

Smart TVs are the descendants of internet-ready TVs and have smarter features such as a centralized operating system, Artificial Intelligence, and a greater collection of apps than the internet-ready varieties, the sole focus of which is providing web access. 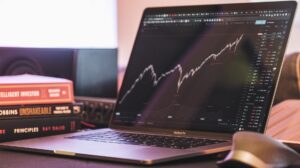 Robert George is a Digital Marketer at Local Cable Deals who loves to play with Data and Analytics. I do and love establishing businesses online through digital marketing.