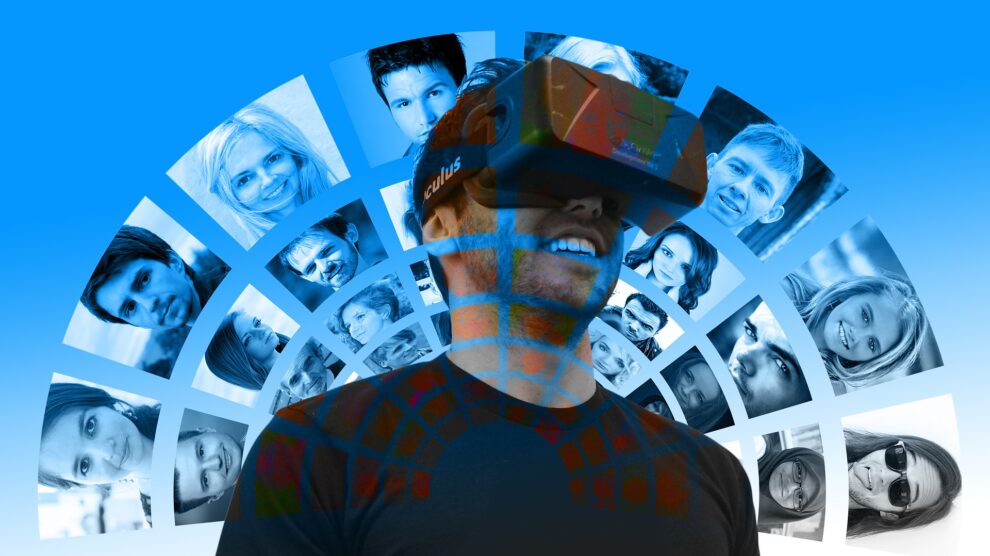 VR is incredible. Whether you’ve been in a headset for ten minutes or ten years that fact doesn’t change. However, it is no secret that being in VR can end up being quite lonely. That sense of virtual isolation you can feel is not only due to the fact that the majority of VR titles are offline and single player, but also down to the fact that being locked into your headset cuts you off from the outside world. Making it hard to play with friends even if they are in the room with you.

Fortunately, in recent years we have seen multiplayer VR explode. Something undeniably helped by the increased accessibility of consumer VR devices. This means that we need not be alone in VR as, well, there are tonnes of ways to engage with others in the medium.

Let’s take a look at the best way to play with friends (and even make some new friends) in the comfort of your very own headset.

Teetering on the edge of meme and eSport, Gorilla Tag describes itself incredibly well. You are a gorilla. You are playing tag with other gorillas. Simple right? But who knew embodying a great ape would be such a blast?

Controlled entirely with your hands, you will find yourself throwing yourself around a map to evade catchers. Seeing you climb trees, hang and hop around freely.

With microphones enabled, this game is an absolute blast. Even if some of the crowd it attracts can sometimes not exactly be PC.

Oh, and did I mention that Gorilla Tag is totally free?

Battle Royale is a genre that has permeated popular culture—from films to games to TV. But nothing plays quite like POPULATION: ONE which endeavors to bring the sweat-inducing thrills of Battle Royale to virtual reality.

Available across devices, POPULATION: ONE differentiates itself by allowing players to climb anything and fly through the map with ease, adding a level of verticality rarely seen in Battle Royales.

Whether you’re looking to squad up with your friends or simply hop into some nail-biting action, POPULATION: ONE is a title to try.

If Battle Royale isn’t your style and you’re looking for a more traditional shooter affair, Pavlov VR should be on your radar.

Drawing plenty of design language from CS:GO and other classic shooters, Pavlov has been one of the top VR shooters for a long time already. Mixing the thrills of military simulation with the wackiness of online play.

Technically still in early access, Pavlov is the top VR shooter on steam.

Love Overwatch? Who doesn’t? Well, Larcenauts is the closest thing you’ll get to Blizzard’s legendary shooter, in VR.

Choosing from nine different classes, each with unique weapons and skills, you’ll find yourself playing through classic 6v6 matches. Adopting a similar need for strong team-play, tactic and technical ability, the VR context of Larcenauts makes it hard to go back to flat-screen hero shooters.

Although the game had a rough reception upon initial release, it has seen great progress and is shaping up to be one of the best multiplayer titles for VR.

Perhaps the intensity of team shooters isn’t what you look for in multiplayer. In that case, I urge you to indulge in the meditative, perspective-giving, and incredibly rewarding VR version of No Man’s Sky.

Sure, the reputation of No Man’s Sky has always been spotty thanks to an incredibly weak release, but since then the team at Hello Games has worked tirelessly to make the virtual universe as good as it can be. Including the addition of a fully integrated VR mode.

Beyond being able to truly appreciate the scale of the enormous game and being able to fly space ships with your own two hands, the greatest part of No Man’s Sky VR is that it supports full cross-play. Meaning you can be enjoying the universe in VR on your PC, while your friend is playing on PlayStation.

For lovers of exploration, space, and cooperative multiplayer, this is a true gem.

Sports and VR are a fantastic match. Eleven Table Tennis is one of the prime examples of this, with developers For Fun Labs pulling out all the stops to make an incredibly realistic (and overwhelmingly fun) version of table tennis in VR.

With the ability to play against the computer or other players, this title will see you sharpen your real-world table tennis skills which acing opponents in VR.

Less a “game” and more an all-out social application, VR Chat needs no introduction. It’s whacky, it’s deep, it’s emotional and it has the potential to bless you with true friendships.

It is undeniably the prime social application in VR, and given that it is free, it should definitely be in your library.

VR need not be a solo affair. With these titles, you will be able to immerse yourself in hours upon hours of multiplayer moments, many of which may well become great memories—after all, that is the power of VR.

In between your VR play sessions, chances are you find yourself in other multiplayer titles. Be it PUBG or WoW, if you’re looking to get ahead in those titles look no further than Eldorado.gg, the experts in getting you New World coins, D2 items, Valorant boosting and many more in any of your favourite games.

Video game freak! He has been gaming since he was 5 and is still swooping anything that crosses his path. Technology enthusiast. Always following technology news and staying up to date as much as possible, making sure he's always ahead of the game.